Frankfurt am Main / Stuttgart, 24 June 2016 - The Mercedes-Benz appearance at the IAA 2015 was awarded a Silver Lion on Tuesday evening at the Cannes Lions International Festival of Creativity, the world's largest creative festival. The work “Mercedes Live!“, realised jointly by Atelier Markgraph, Frankfurt am Main and jangled nerves, Stuttgart, convinced the top-class jury at the Côte d’Azur. The vividly orchestrated stage space was the only trade fair production worldwide to win the most important industry award in the category Design. It is thus one of only six works from Germany to be honoured with a lion for their design achievements this year.

Since 1954, the coveted Cannes Lions have been awarded during the Cannes Lions Festival for outstanding communication. In 2016, the award set a new record with a total of 43,101 entries. Of these, 2856 projects were submitted in the design category alone.

For eleven days, the two creative offices Atelier Markgraph, Frankfurt am Main and jangled nerves, Stuttgart, transformed the domed building of the Frankfurt Festhalle into a lively stage space for the topics of digitalisation and design - topics that are currently determining automotive development. Three exhibition levels with over 9,000 square metres enclosed the open central space. Already during the ascent at a height of 13 metres, visitors were offered their first insights into the various theme rooms of the three exhibition levels as well as the live show in the centre. The seemingly weightless Silver Flow, a silver space-filling lamella sculpture, merged seamlessly into the stage's digital media area.

The stage production made visible how cars go online in the data room, how they recognise their surroundings in sensor fields, how they adapt aerodynamically to the wind and how they master obstacles in real worlds. A Spidercam generated an immediately perceptible live atmosphere. The live images generated by it were supplemented with augmented reality. A kinetic LED lamella curtain, which was integrated into the overall choreography, provided a view of the current product portfolio, which was waiting for its use on stage in a three-storey shelf.

The silver lion is the ninth prize for Mercedes-Benz's appearance at the IAA 2015.

Already in spring, the trade fair production convinced at the ADC Award, the most important German creative prize, and won five ADC nails for itself. According to the jury, the work is not only one of the largest, most complex and most highly regarded of its kind, it also “once again sets the bar for holistic brand experience spaces at a dizzying height“. In the category “Communication in Space: Trade Fair Presence“ the jurors awarded a golden ADC nail for the overall staging. Gold and a silver ADC nails were awarded in the categories “Communication in Space Craft“ and “Event Craft“ for the use of Spidercam and Augmented Reality in the digital stage presentation. The analogue-digital stage set-up received further gold and an award in the Craft categories. The production “Mercedes-Benz Live!“ thus made it to second place among the most successful campaigns with a total of four nails and an award.

At the Golden Award of Montreux, the Mercedes-Benz presentation was awarded gold in the categories “Set Design / Architecture“ and “Best Use of Branded Content / Entertainment“ and a finalist award in the category “Temporary Brand Communication“. 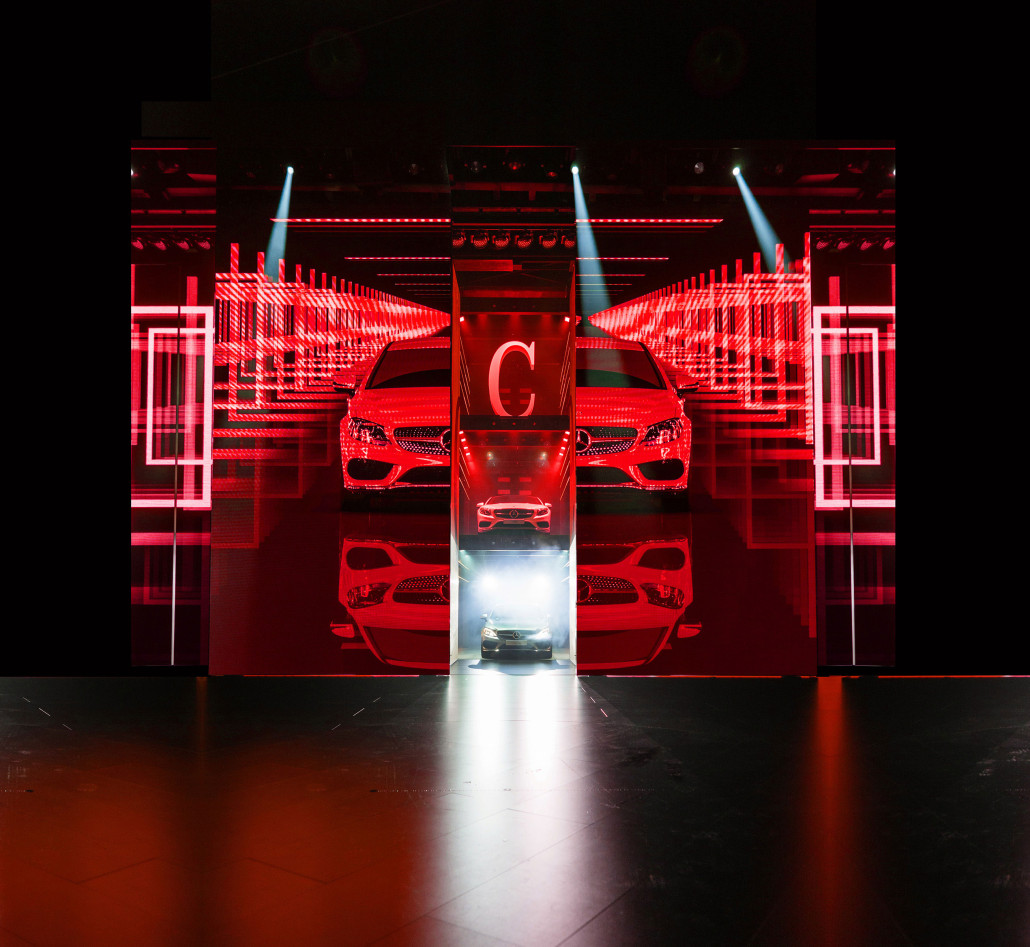 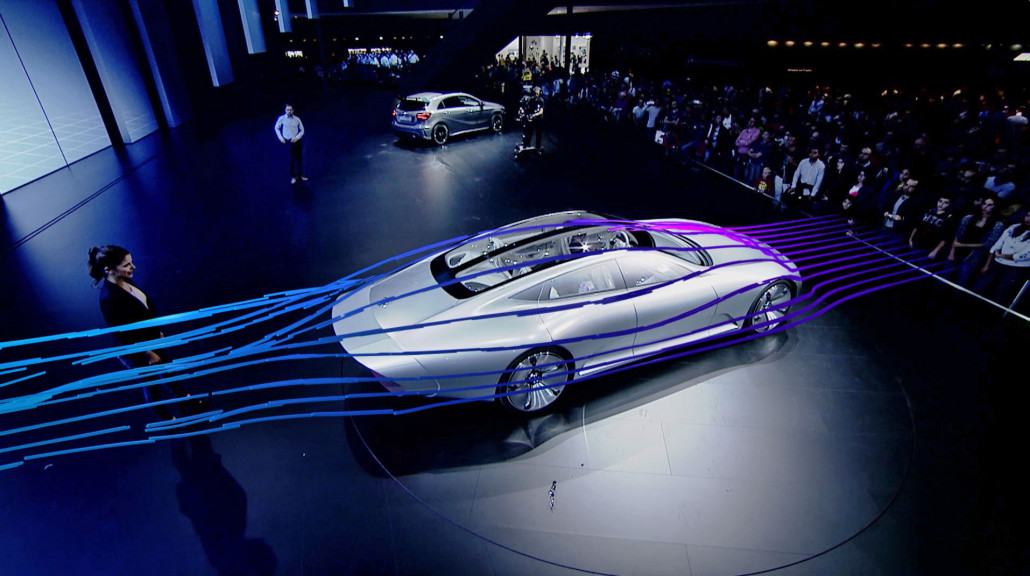 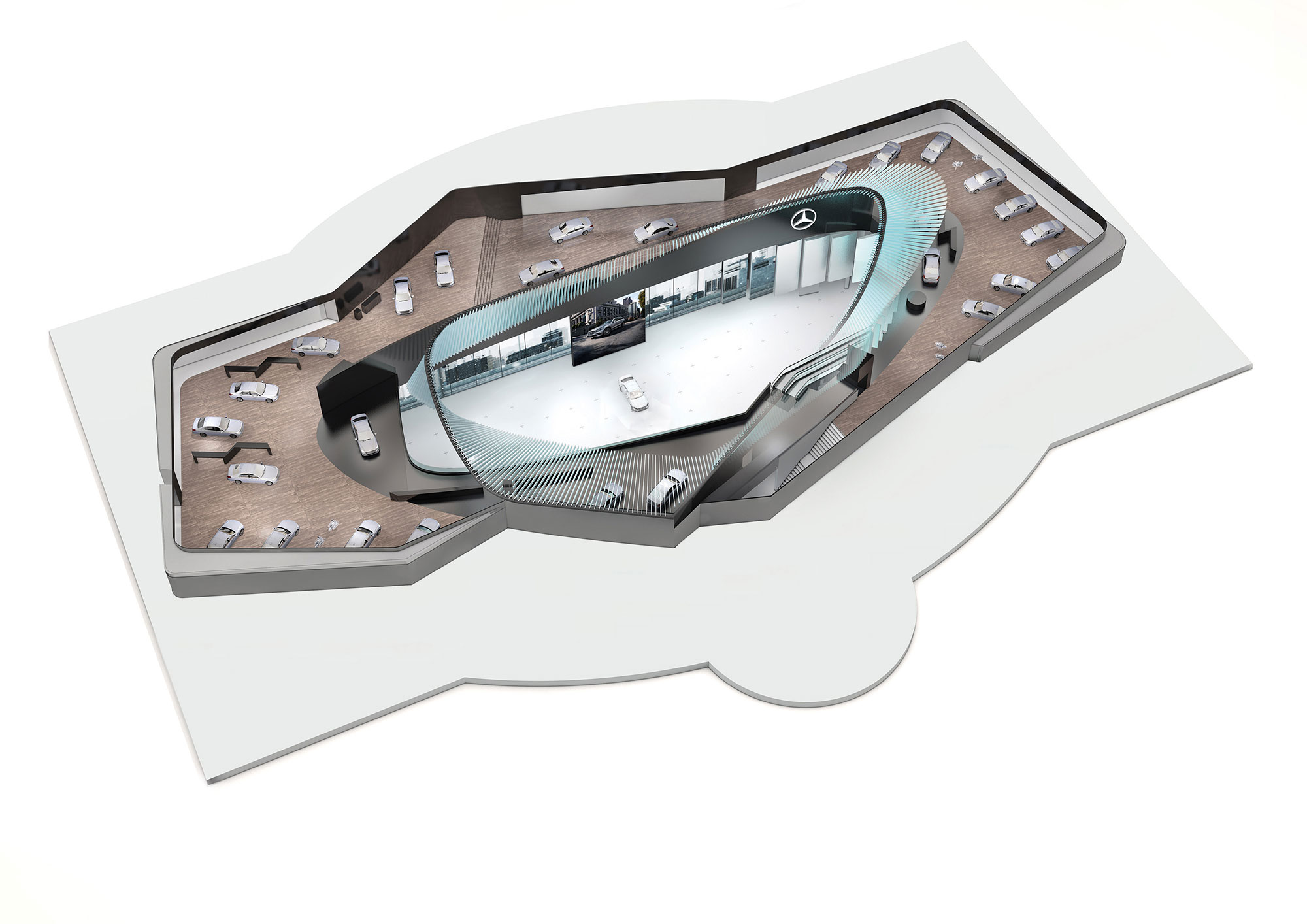 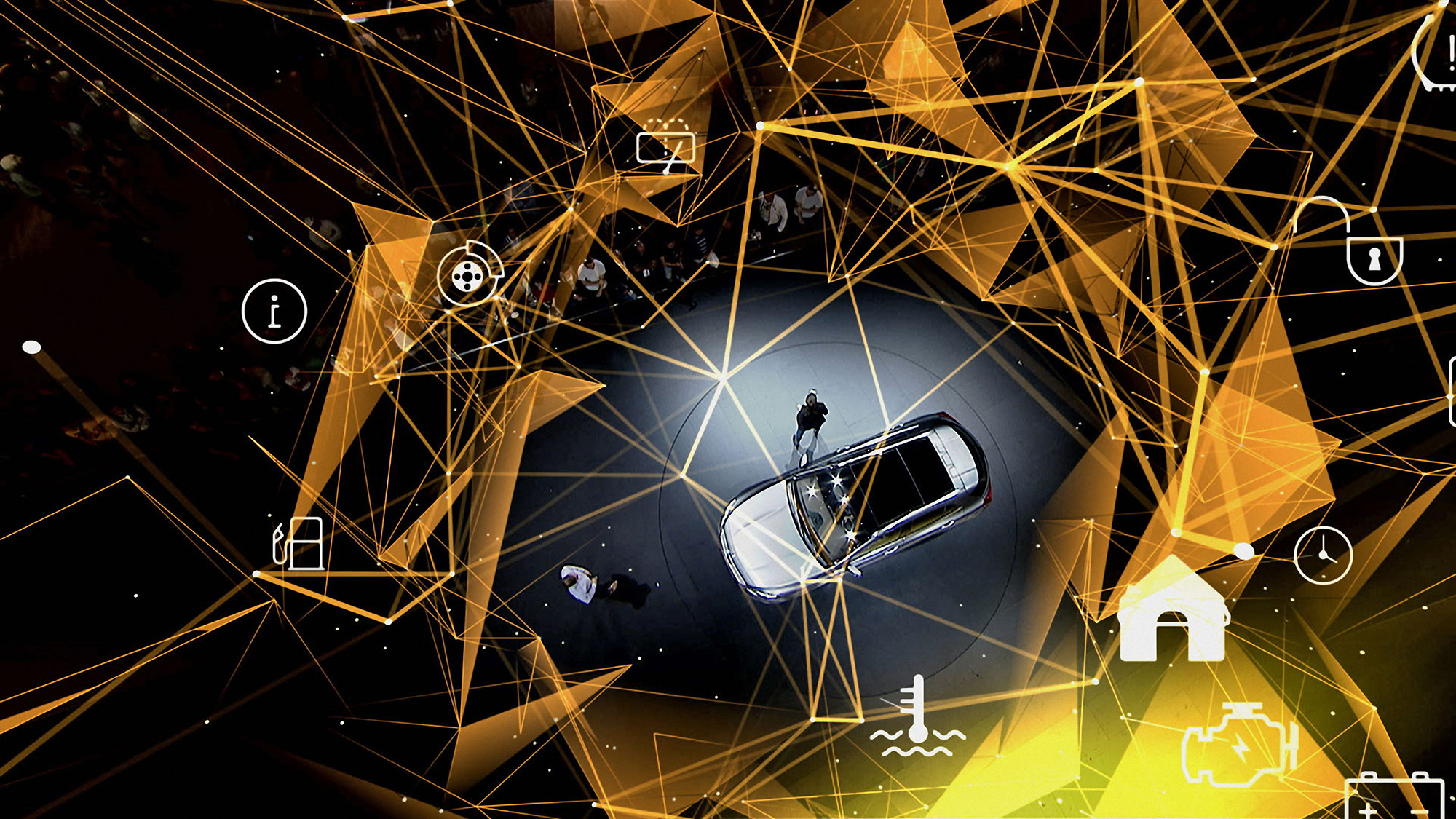 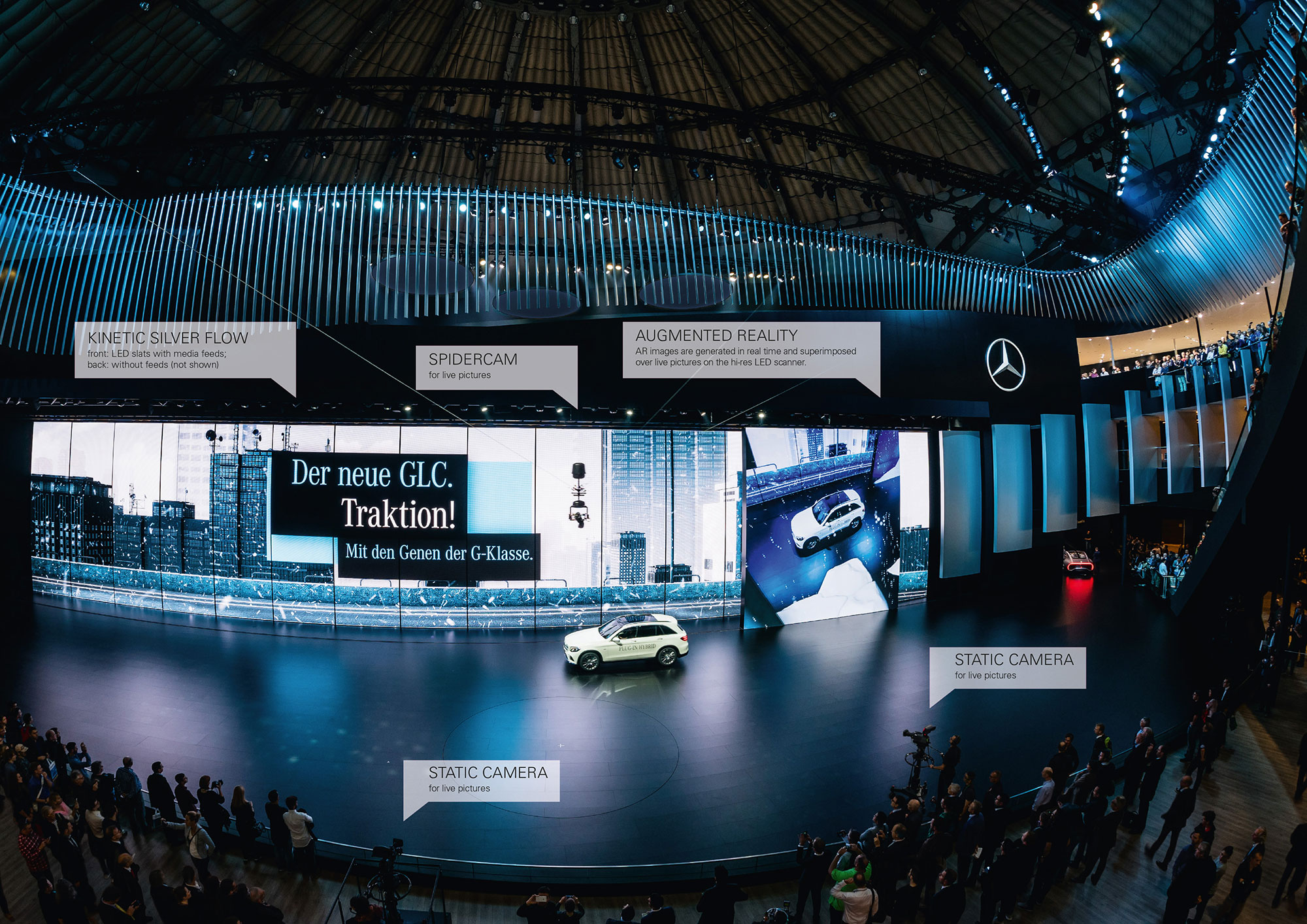 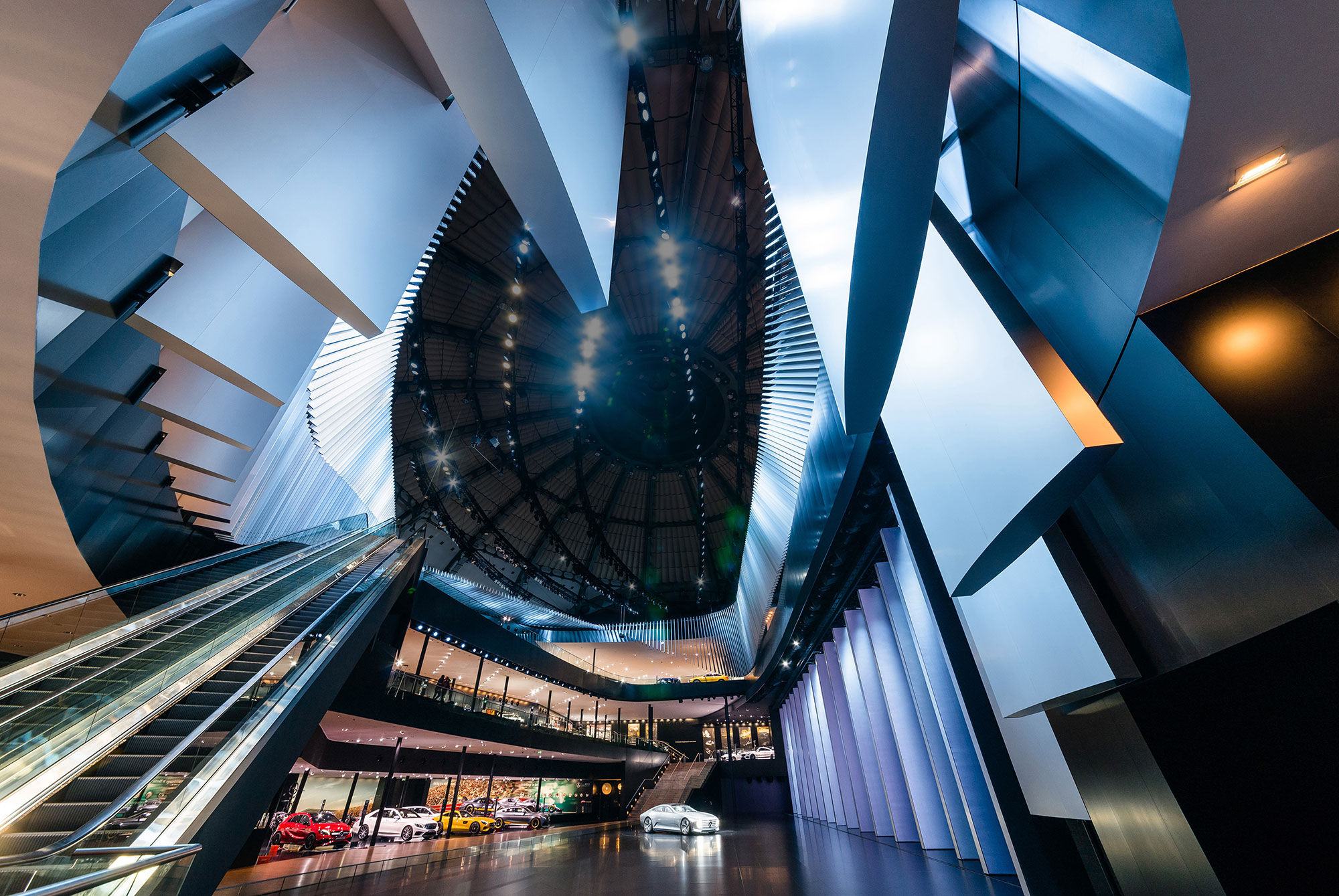